July 9, 2018 by MaxillaAdmin in Technology

The Wand (CompuDent or STA system)

The Wand is essentially a computer-controlled dental injection. The flow rate of the local anaesthetic is controlled by a computer. This means that the injection is guaranteed to be slow and steady and therefore comfortable.

Even though Milestone Scientific – the manufacturers of the Wand – now call their products CompuDent and STA (Single Tooth Anesthesia) System, we’ll still call it the Wand here – because a lot of people with needle phobia describe it as their “Magic Wand”!

Most people who have had a bad experience with injections think that needles sting because the skin is pierced, but this is usually not so! Most often, the sting was caused because the anesthetic was fired in too quickly. Obviously, it is possible for the dentist to control the speed with a standard syringe, but the idea of the Wand is to take out the “human error”. This can be very reassuring for people with previous bad experiences. 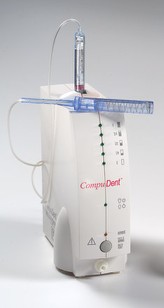 It simply doesn’t look like a syringe! Welcome to the space age…

As you can see in the photo, the “hardware” looks similar to a miniature computer tower.

On the top of the little tower sits a cartridge with local anaesthetic. A tube connects this to a pen-like handpiece (which does sport a needle. You’ve gotta get the sleepy juice in there somehow, but the needle is very tiny.)

The handpiece device looks just like a ball point pen (see below).

It is even held like a pen! Using the Wand is very enjoyable for the operator (that is, the dentist) because it is so light and easy to handle. To start the computer, the dentist uses a footpedal connected to the computer tower. The computer does the rest. That way, the operator can focus all attention on holding the handpiece in the right position.

The cartridge holder, tube and wand handpiece are all single-use disposables.

A “cool blue” “safety” wand handpiece with a self-retracting needle is also available (shown in the photo featuring the CompuDent tower above). The safety feature is there to prevent dental staff from accidentally poking themselves while getting rid of used handpieces. However, most dentists prefer the “standard” wand on the left, because they find it easier to handle.

The latest version of the Wand, called the STA system, again looks very similar, but they’ve added more colourful buttons to make it look even better (see photo to the right)!

The STA has two modes: the first mode is the traditional wand technique. It now has three speeds so that the delivery can be made faster after the initial slow bit. The second mode is the Single Tooth Anaesthesia (STA) mode which uses a different needle, and has a visual gauge and emits little beeps to let the dentist know when they’ve placed the needle correctly.

Our dental practice strives to give an “excellent patient customer service experience”. Dedicated and well trained staff members: Meet Joanie, Susie, Brittany and Jamie will manage all aspects of your visit in a friendly, caring, and efficient manner.

Whether you need simple convenient emergency care or extensive treatment, our office can perform most services in house saving you the time and hassle of most referrals.